Demon’s Dungeon is a click action RPG in which you form a party of up to 5 members to fight monsters. In order to get past the stages, your party will need to defeat the bosses of each stage. Party members can be drawn from gachas and upgraded in order to strengthen the team.

The game features the traditional click to win style in the form of a combat RPG game. You can clear waves by allowing the game to “run” itself, or increase the farming speed by repeatedly tapping the screen.Defeated monsters will give gold, which can be used to upgrade characters. Bosses can be found after successfully completing a certain number of waves.

The game also features missions to complete, and will reward completed missions using diamonds, which can be used to buy gachas,featuring 2, 3, or 4 star characters.

The game is simple, yet quite addictive. It does not require much focus, which allows you to play while doing something else (as I am doing right now). This game is excellent as a simple side game, one which you randomly take out and play for a few minutes. However, the game is a bit repetitive and the attack sequence for the boss fights are quite uncomfortable in terms of ability timing. There is no such thing as skill or challenge. To win, all you need to do is farm, upgrade, fight bosses, and repeat. 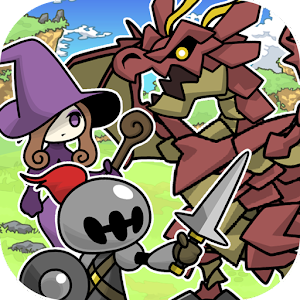