Omoha everyone! This is Azerith. The connection between Shuma and your cyber space had become stabled once again, therefore I can forge some new connections for gamers.

Recently, my sensor picked up another new feed, and after I trace back the feed, I discovered this new smart phone app game called Machikoro Match (T.S.U.K.O.M.I: the term “koro” refers to “korokoro”, which is the sound of rolling dices!)

Created by the Aiming and Grounding Inc., Machikoro Match is a smartphone game app made out from the renowned board game model nominated in the Spiel des Jahres 2015. (T.S.U.K.O.M.I: Spiel des Jahres means Game of the Year in German). Originally created by Grounding Inc. Machikoro was introduced in early 2014 on both Android and IOS platform. However, due to certain reasons the game was announced to cease service in the end of October in the same year. On the other hand, Aiming is an influential smartphone game company that plans, produces, develops and operates online games. Successful titles such as 剣と魔法のログレス いにしえの女神, TriLink and ひめがみ絵巻are all products of Aiming.

Machikoro Match is a Dice rolling and Town building/running Board Game. Player will be the new superstar joining Happy Construction, a company which is on the verge of existence due to severe competition. Assisted by Machiko, your personal assistant and secretary, together you and Machiko are aiming to bring back the glory of Happy Construction and thrives in the bright future. (T.S.U.K.O.M.I: The same old touching and yet typical beginning of a story…)

Initially, players can decide which avatar to use to represent themselves. The decision can be remake later in the game, so don’t worry!

Player then enters their in-game name.

Once we are into the game, player will be greeted by the lovely Machiko and she will brief us with the current status of Happy Construction. Being your only ally who didn’t ran away in tough situation, Machiko will explain to us how to survive in the upcoming battle; which might just turn the table around!

Player will learn the basic of dice battle in this tutorial. To make a roll, player needs to drag the dice icon down to roll it. Player will then land on the number rolled out by the dice, if the player is put on to land with facility, then its unique effect will be triggered.

To maximize your chance of winning, it will be wise to construct more facility on other number blocks of land.

Once the player has obtained enough money from various, the battle can be concluded by building the particular landmark located in the bottom-mid of the screen.

After victory, player receives rewards and if challenges have been completed, extra rewards will be available for the player. The challenges can be view before the battle starts. New facility can be obtained as victory reward only as reward for first victory.

After rolling the dice, the player will receive ‘salary’ from the company. The amount of expected salary at the end of each roll can be seen in bottom right corner, under the avatar icon. (T.S.U.K.O.M.I: The salary of a salaryman~) Player can then build new facility right after that.

Upon receiving enough experience, player will level up! Once level up, player’s starting capital and turn salary will increase accordingly, (T.S.U.K.O.M.I: Even salaryman can buy a house! –Japanese Drama) stamina and heart point will also be refilled when level up.

Arriving at the third battle, this time, player will be using the standard battle map for machikoro match, which is consist of 5 rolls and 6 columns, a total of 30 block of land. In standard machikoro match, 2 facilities from the deck of player and opponent will be randomly build on the battle map.

In the last tutorial battle, Machiko will show us the hidden power of the dice. By continuously dragging down the dice, player can ‘sort of’ determine the number roll out by the dice. This method only works sometime, (T.S.U.K.O.M.I: C’est la vie ~) and if we are lucky enough, we might see the work of god – MIRACLE.

Finally, after 4 exhausting tutorial battles, player gets to do the GACHA. Also, to celebrate the player becoming the new CEO of Happy Construction (T.S.U.K.O.M.I: well how hard could that be? There is only 2 people in this company…), the facilities we get from this GACHA will be S grade or above!

Player can then do 3 more battles on their own before finally unlocking other features of the game. I won’t disclose too much here as that would probably rob away all the fun. Go and try it out yourself!

In my opinion, it has been a while for game developers to focus on fun board game due to the surge of RPG style due to its enormous market. I do enjoy a good board game every now and then to relax and have fun with friends. With the release of interesting game like Machikoro Match as a smartphone app, I hope more game developer can see the possibility in such game genre and create more wonderful game for us to play.

As always, I will try to reconnect and share more new game connection with you folks once the signal becomes stables again. In the meantime, please help Machiko out and bring…hap..pi..nes….back..int..o..hap..p.y…c..on..str…u.c.tion.. 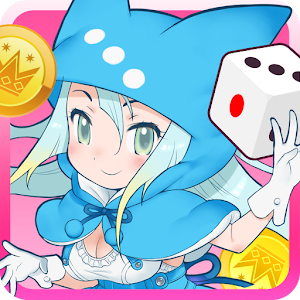