“Star Ocean: Anamnesis” is created by tri-Ace in Japan, the well known RPG game “Star Ocean” released by SQUARE ENIX began its first mobile version, it is also a new theme for the series. Anamnesis combined the old series plus a fascinating action system, also the characters you all remember will also appear in Anamnesis.

Story of the new work “Anamnesis” is set on “Star Ocean 5: loyalty and betrayal” (PS3/PS4) 2 years after the story, which in universe date, year 539. After the war between the universe agents and Chronos. The agents welcomes a short period of peace, sadly the agent space ship GFSS-3214 was attacked while on a mission. As players being the captain in the game, you will attempt to escape and space jump, sadly your ship failed and landed onto a star far far away…in this empty star, players will meet a female that has to ability to summon warriors. From here, players will begin the journey of going back to earth along side with this female.

The combat system of ”Star Ocean” is very similar to Tales of Legendia, which is a reason why it is so loved by the players. “Anamnesis” targets classical quick plays which is a huge evolution, looking at the animations, the combat system also seems very similar with the game Colopl Rune Story. Swipe to move, lock on target and attack. It should be possible to move your character freely even in single player mode just like the original series. Besides all that, “Anamnesis” also added many more attack combination and 4 players can team up and fight at the same time.

There is a new girl character in this game. It is the girl you will meet when you fail your attempt at space jumping. She has abilities never seen before and will assist you back to earth.

An AI robot that controls the space ship. Once almost remade due to displaying some sort of emotions. It was not terminated because the captain (player) insisted to keep him. The robot is very thankful to the captain. 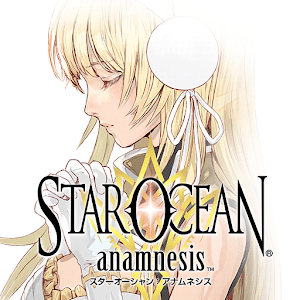