Developed by Happy Elements and released in Japan in the summer of 2020, Helios Rising Heroes made its debut in the Otome genre as a turn-based RPG. Charmed with gorgeous battle animation and vibrant characters, players are led on a fully voiced story to defeat the notorious group Eclipse as an agent of the hero squadron, HELIOS.

With a variety of cards to choose from based on sixteen distinct characters, it can be difficult for new players to get started. As the game’s 2nd anniversary is coming up this summer, this Helios Rising Heroes tier list 2022 features some of the most powerful cards that new players can take advantage of. Most of the cards in this tier list are currently available in the common gacha banner two months after their release, but they cannot be obtainable from banners featuring new cards.

★4 [Sweet Spell With a Side of Chocolate] Dino Albani

Though released over a year ago to celebrate Valentine’s Day, this Valentine Dino card proves to be an excellent support unit for new players and veterans alike.

Dino brings a strong HP regeneration effect to the team, which is highly useful for new players. He also carries the ability to inflict Bleed on an enemy while simultaneously giving all team members two Special Attack Orbs, which are needed to increase the damage dealt when a Hero attacks an enemy.

Dino also possesses a powerful Link Skill, allowing any version of Faith, Junior, or Keith to have up to a 100% chance to land a critical hit.

Gast is a self-sufficient Brave element attacker that can boost his own critical hit rate and critical hit damage over the course of a fight, making him extremely powerful against a single target. He can also inflict Bleed onto a single enemy and can increase his damage against an enemy with the Bleed status.

His skills become even more powerful when used consecutively, allowing his BP Gauge to fill up faster and enabling Gast to unleash a Burst Skill quickly.

This special card featuring Junior is an amazing buffer, increasing the critical hit rate and critical hit damage of the party. He can also increase the party’s damage output against Brave element enemies, making him very useful for new players who need to inflict more damage but lack a dedicated attacker.

As of this writing, his debut banner is currently ongoing in-game. Once the banner leaves, he will not be added to the main gacha pool for at least two months.

As the poster boy of the game, Akira brings plenty of offensive support to the team, as his first skill inflicts a stackable DEF Down and Burn debuff onto an enemy.

His second skill buffs the team’s damage against enemies with the Burn status at the cost of 30 points of his BP Gauge, making him a powerful Brave element ally against Bosses. He also provides the party with two Attack Orbs, which are invaluable in very difficult fights.

*Note that this version of Akira Otori cannot be obtained outside of limited-time banners, as it was released to celebrate Helios Rising Heroes’ first anniversary.

Ren possesses a versatile kit, being able to buff the team’s critical hit chance and Burst Damage, and can gain the ability to buff his allies’ ATK through repeated uses of his first and second skills. His Burst Skill doesn’t deal significant damage, but he can inflict a stackable DEF down debuff on an enemy.

This card also carries a strong Link Skill, giving any Gast, Marion, or Victor card the potential to land a guaranteed critical hit.

★4 [Let to can in Fantastic Circus!] Billy Wise

Billy is a powerful attacker who relies on his ability to inflict the Bleed status on enemies to deal massive single-target damage in one turn. His attack power can be further increased with the Burst Damage, critical hit rate, and critical hit damage buffs that he brings, which become more powerful the more he uses his skills.

Dressed in a groom’s outfit, Faith is a Cool element supporter that increases the critical hit damage of the team with his stackable buffs, while also increasing the party’s damage against enemies with the Bleed status. However, he cannot inflict this debuff onto any enemies himself. On the other hand, Faith hits extremely hard when he has higher HP, thanks to his passive skill.

Like [Operation Wedding] Leonard Wright Jr. in SS-Tier, Faith’s banner will disappear soon after the current event ends, but he will be obtainable again in about two months.

Jay is a simple attacker who is effective against Brave element enemies, being able to increase his ATK and critical hit rate. Using his skills as often as possible is recommended, as it makes his Burst Skill deal more damage depending on the number of times his skills are activated over the course of a fight.

★4 [Let to can in Fantastic Circus!] Gray Reverse

Gray is a Passion element supporter who can inflict the Bleed status while decreasing an enemy’s DEF with his first skill. Consecutive uses of this skill increase the amount of damage dealt by the Bleed status, while also making his DEF debuff more powerful.

He can also regenerate the party’s BP Gauge over several turns with his second skill while allowing the team to deal more damage against enemies with the Bleed status.

Marion is the first choice for players who prefer a riskier style of play, as he consumes his own HP to use his skills.

This celebratory card of him consumes 20% of his maximum to activate his first skill, increasing the BP Gauge of his allies while giving each member an Attack Orb. His second skill consumes 30 BP to heal all allies while increasing their critical hit damage, making him a self-sufficient Technique element supporter.

*1st Anniversary version of Marion Blythe can only be obtained under certain limited-time banners and is not in the normal gacha pool.

Keith is a strong healer, being able to provide a strong HP regeneration effect to himself and an ally alongside buffing the damage dealt to Technique element enemies. His Burst Skill allows him to deal more damage when he has a low amount of HP.

However, without a way to reliably obtain a Special Attack Orb, he cannot use his second skill, making him less useful in difficult fights.

This card featuring Akira in the snow provides critical hit rate buffs to his team with his first skill, while also increasing the BP Gauge of his allies. His second skill can increase the team’s damage against enemies with the Burn status, while also regenerating the party’s BP Gauge over several turns. However, he cannot use either of his skills if his current HP is below 60% of his maximum amount.

The main story of Helios Rising Heroes emphasizes the importance of teamwork, and this aspect is demonstrated in combat. Team Synergy is Important! Even with meta units, players cannot easily progress through the difficult portions of the game unless the team is compatible with the skill sets of the other members.

Though the game has seen its fair share of power creep in the past year, the characters released over time typically remain around the same power level with very little favoritism. Additionally, meta cards are not required to complete the most difficult of battles, and being PVE exclusive is a positive component of the game that encourages players to use their favorites. 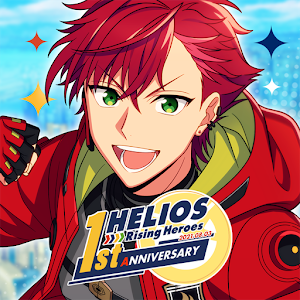