GREE has revealed that the mobile game adaptation of Saga of Tanya the Evil, Saga of Tanya the Evil: Battle of Magicians, will be coming soon! During their TGS2020 live-stream, the company invited Aoi Yuki (悠木 碧), the voice actress of Tanya von Degurechaff (ターニャ・フォン・デグレチャフ), to give an overview of the game.

Nicole came from a noble family, but her family fell in straitened circumstances. In order to revive her family, she joined the military and later became a member of the 203rd Air Mage Battalion. Though she has been training in the snowy mountains for a month with the Battalion, she remains in a shallow relationship with the team members. She sometimes compares notes on martial arts with Glanz.

Christina / Chris is a veteran soldier from the former Army, who also served as a training instructor. She was retrained as a Magician for her magic talents. She is one of the most experienced soldiers in the 203rd Air Mage Battalion. She was self-restrained and faithful to the commands of her superior. But on the other hand, she is a heavy drinker, who extremely hates insects.

Players will also be able to form a team of five to engage in real-time magic battles with the signature characters from the series. In order to rebuild the world of “The Saga of Tanya the Evil,” the characters will wield different weapons and have advantages in specific positions. Players can also equip weapons, military uniforms, and strategic plans to the characters.

The game will feature 15vs15 real-time guild battles. Players will be able to team up with their guildmates to challenge other guilds. 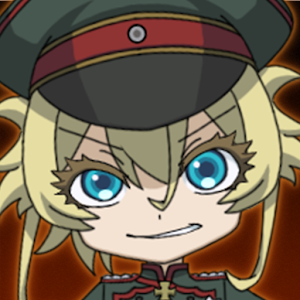