Created and illustrated by the original author of the Shaman King series, Hiroyuki Takei, the characters are designed to give a nostalgic feeling to fans while maintaining the world view of Shaman King. The designs and the original story is based on the following question: “What if I, or you, were a character in the world of Shaman King?”

Koel (CV: Mikako Komatsu)
A 13-year-old student at Shinra Private Academy, who is capable of seeing ghosts. She is in the same class as Oyamada Manta. Koel’s fate takes a big turn when she meets a new transfer student wearing an open shirt, known as the “Ghost Man(?)”.

Mirishira (CV: Kana Ichinose)
Another shaman who appears in front of Koel. Her spirit is named Rock. She is dedicated to her mission, but her lack of athleticism is her downfall. Although she teaches Koel about the existence of shaman fights…  it seems that she has some ulterior motives for the coming battles.

Rock (CV: Nobuyuki Hiyama)
Mirishira’s spirit. In order to summon him, Mirishira uses a Kanachi doll. Rock is like a big brother to Mirishira, but he also has a habit to treat her like a child.
It seems that Rock has his own motives behind all this…

Io (CV: Shunsuke Takeuchi)
A young man who calls himself the Tenth Priest of the Patch Tribe, a tribe that runs the Shaman Fight in Tokyo. His face is usually hidden behind a mask, which makes it impossible to see his true intentions.

Shaman King: Funbari Chronicle is the first official smartphone game based on the Shaman King anime. The game features high-quality 3D graphic battles to faithfully reproduce the worldview of Shaman King. A “Mangatic Mode” will be available for players to relive the signature scenes from the series. It will also feature original illustrations and episodes that are exclusive in the game. 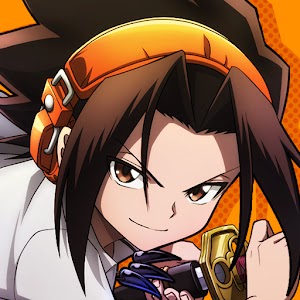