Titled “Bubble Bobble Classic”, it is based on the 1986 arcade game published by Taito. Players will be able to control Bub and Bob, two dragons that set out to save their girlfriends from a world known as the Cave of Monsters.

In the game’s plot, “Baron Von Blubba” has kidnapped the brothers Bubby and Bobby’s girlfriends and turned the brothers into Bubble Dragons, Bub, and Bob. Bub and Bob have to finish 100 levels in the Cave of Monsters in order to rescue them.

In each level, Bub and Bob must defeat each enemy present by trapping them in bubbles and popping, who turn into bonus items when they hit the ground. Players will have to control the dragon to move along platforms, fall to lower ones, and jump to higher ones and over gaps.

The smartphone version is free-to-play with in-game purchases for items. A power-mode is also available where the dragon will have power-up items since the beginning of the game. It currently supports single-player only. 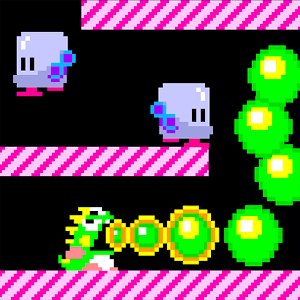