In celebration of the 2nd-anniversary milestones, WOTV FFBE is having a slew of exciting campaigns from March 25! If you are curious about what they have on their sleeve, be sure to check out our exclusive interview with the game producers, Kei Hirono and Hiroki Fujimoto, who looked back on these two precious years, and revealed the future plans for this globally popular smartphone game.

Q: Happy 2nd anniversary to the global server of War of the Visions: Final Fantasy Brave Exvius! Please share your comments on this milestone.

Hirono: We always have this kind of question, but time flies when it comes to War of the Visions: Final Fantasy Brave Exvius.

It was a difficult time before the game launched. But after the release, with the warm support of the users, we have been striving to improve the gaming experience. The coronavirus pandemic also pushed us to do better in operation and makes time pass even quicker.

Fujimoto: Agree, it was two years in a blink of an eye. Including the production time, it was already three years since I was involved in the WOTV FFBE project. The development team had tried hard to make this game enjoyable for not only the Japanese players but also global players. We could’ve made it to the 2nd anniversary if we don’t have the support of players around the world. With this opportunity, we want to express our gratitude for your continuous support.

Q. What are the major changes for War of the Visions: Final Fantasy Brave Exvius in these two years? Is there any memorable story for the development team that you can share with us?

Hirono: After all, I think the biggest change was that we couldn’t do any offline events such as fan meetings due to the influence of the coronavirus disease. Though we are still unable to meet the users directly, it was nice to have a fan meeting online last year. It was a positive and good experience, and we hope to continue holding these kinds of events in the future.

Fujimoto: The COVID-19 pandemic started almost at the same time as the global server launches, and it becomes impossible for us to hold any planned offline events or participate in any international game shows. That’s why we tried to hold different events online to maintain communication with global users. This year, we would try to organize a larger online event so that more players could join.

Q. Among all the characters introduced in War of the Visions: Final Fantasy Brave Exvius, which characters do you fancy the most and why?

Hirono: My pick is Gilgamesh. He is a crucial character that connects FFBE and the worldview of the Phantom War. He is also a character that is greatly involved in the story plot. He is a lovable character that has a human-like personality, despite being a paranormal being like a god.

Fujimoto: WOTV FFBE has lots of attractive characters, but I do have a special affinity with Vinera considering the story development. The character design of Vinera is one of her charms. For the story, we would suggest you enjoy the twist of the plot by playing the game. In addition, I also appreciate the character design of Gargus.

Q. We’re so curious about the team builds of the two producers. Can you share some of your most-used units and vision cards with us?

Hirono: My party has characters that are still unavailable in the global version. I’m afraid that I could only reveal the basic concept of my team build. Balancing the tanker and attacker is orthodox in team builds so that it can perform stably in most situations.

Fujimoto: I usually build my party with the original unit of the global server. To form a strong party, it is necessary to match the character elements and build a well-balanced party with different jobs. I have fun building parties with Duane, Fryevia, Starlight Elena, Ibara, and more as the center of the team.

The vision cards also enhance the stats of a specific unit, therefore equipping the most suitable card for each unit can fully utilize the potential of the units.

Q. When there are more and more characters and high difficulty stages being introduced to the game, is it difficult to maintain the game balance while creating new content that suits both new and veteran gamers?

Fujimoto: As a matter of fact, yes.

High difficulty stages are adjusted for hardcore players, so it may be difficult for new players to take on the challenge. But whenever we add a new character or a new quest, we’ve modified the content so that more players can participate and enjoy it.

For example, when introducing a new unit, we make it as easy as possible to obtain the required materials. So that even new players can easily grow the unit in a short period. But if players want to make stronger your unit stronger, they would have to challenge the high difficulty stages. It allows existing players to always challenge for higher ground.

Q. Compare to the Japanese server, WOTV FFBE has introduced several original units that are exclusive to the global server. Is there a particular reason for this arrangement? Will there be more exclusive original units in the future?

Q. In these two years, WOTV FFBE has collaborated with different popular series, such as FINAL FANTASY VII REMAKE and Tomb Raider. Are there plans for the next collaboration? Is there a particular series that the producers want to collaborate with?

Hirono: There are so many series that we want to collaborate with, and in fact, there are several plans that were currently under discussion. So I’m afraid we can’t reveal more.

Fujimoto: Of course, we’ve considered various plans, and some are actually in progress. But as the details are not yet decided, so please stay tuned in-game or on the game’s SNS for further announcements. But global players can certainly look for the collaboration with Persona 5 Royal, which was launched on the Japanese server last December.

Q. As the game is currently celebrating its 2nd anniversary, what are the upcoming updates or celebration campaigns that players can expect?

Fujimoto: The FFVI collaboration event is certainly not-to-be-missed. During the event, players will be able to obtain the collaboration unit, Locke for free. So please don’t miss this opportunity to join this event.

In addition, as a special celebration for the anniversary, a summon will be held featuring all the FF collaborated characters available in previous events. So even new players can also lay their hands on their favorite FF characters.

Q. WOTV FFBE has a huge gamer base around the world. Would you consider organizing a global event or tournament to connect global players?

Fujimoto: At the 2nd anniversary live stream, we held a PvP tournament for players to battle against each other. We’re more than happy to extend the tournament so that players around the world can participate. We are still in the process of considering when and how to do it, but will surely let you know when anything concrete has been decided.

Q. Last but not least, please give a message to worldwide fans, who support the series since its launch.

Hirono: It’s already two years since WOTV FFBE launches and it feels like much longer. Continuously operating the game has always been a lifelong task for us, especially when we try to do our best in providing the best gaming experience. Thank you for your continued support! I hope that we will have more opportunities to interact with global users soon.

Fujimoto: It’s the 2nd anniversary in a blink of an eye, and I hope players will grow together with WOTV. So that we can celebrate the game’s 3rd, 5th, and even the 10th anniversary together.

To make WOTV more enjoyable, the development team will do our best to create content referring to the players’ voices. Your messages, requests, and the reaction of the community are always good references to us. We appreciate your continued support. Like I’ve mentioned in the 2nd-anniversary live stream, I hope we could celebrate the 10th anniversary of WOTV FFBE together in 2030! 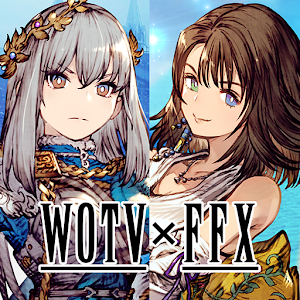