Yuanfun game’s brand new mobile MMORPG Kamikai Kiden -The Illusion of Eight Million Gods- officially launched on iOS and Android today on May 11 in Japan, and has already topped the free game charts of Google Play and App Store!

Kamikai Kiden is an MMORPG based on Japanese mythology. As a resident, you can control one of eight classes/characters simultaneously, exploring the endless mythical world. Embark on a grand adventure through a full-fledged mythical story.

Players can also engage in the game’s god-dwelling system. If a player has difficulty clearing a stage, they can use the game’s “Kamijiku” to channel their chosen god, and gain almighty power to defeat their enemies! Players can also train these gods to gain further power when using them.

The game features real-time combat and cooperative play with other players. The game has options for manual, and automatic controls for leisurely farming. Don’t feel like fighting? There is also a plethora of minigame and casual modes and activities to enjoy alone or with friends!

The game features a selection of famous voice actors for several of the game’s characters!

To celebrate its pre-registration milestone of 300,000 players, Kamikai Kiden is giving away several goodies including the “Inari Fox” skin for for for all players logging in!

Players with a playtime of 60 minutes, and who own a character above level 30 can receive several items from the free consecutive gacha! One of the rarest rewards is the spirit beast Seiro Rensen!

Players who log in for 30 days will receive 600 free original treasures and the unique Pearl of the Serpent amulet! 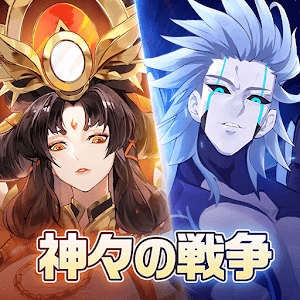