Code Geass: Genesic Re;CODE mobile game is now available for download! Servers are officially up and ready-to-play. Google Play checks for the download source for this game. As such, the game only runs properly when downloaded from Google Play. Due to this, QooApp will not provide a download link for this game.

In celebration of the game’s pre-registration achieving 1 million milestones, all players can receive 4,000 diamonds when the game officially launches. The game’s official youtube channel also streamed several videos to preview its gameplay.

The game was originally announced to release on September 27, but it has been delayed to October 4 for quality improvement.

Code Geass: Genesic Re;CODE is the official sequel to the Code Geass franchise. The game includes brand-new, original story scenarios from leading writers and Sunrise under the supervision of Goro Taniguchi and Ichirō Ōkouch, as well as a story mode for players to revisit the stories from the franchise.

Players will play as the new protagonist of the series, Al, who possesses the Geass to transcend time and space. You will be following Al to create his revenge story and unveil the secrets of Geass.

The game features two battle modes; Story Battle and Abyss Simulation Mode. Proceed the story and engage in the battles with the signature characters from the franchise. You will be able to use the Geass of the characters with animation cutscenes.

The Abyss Simulation Mode features strategy-based battles, in which you have to command the Knightmare Frames and characters to complete different missions. 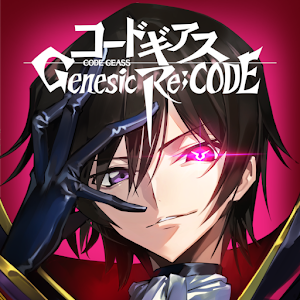